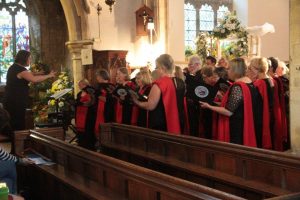 Last Saturday I sang in my very last concert with Raunds Community Choir at the Raunds Flower Festival in St Peter’s Church. I have been singing with the choir since its very first meeting six years ago. When I joined, I said to the organiser, “I’m not sure how regularly I’ll be able to attend as I often teach on a Tuesday night”. Little was I to know that I would fast become hooked and Tuesday night lessons were immediately rescheduled. I only missed one and a half rehearsals in six years!

Saturday’s concert was the best we have ever given and at the end I was so full of adrenalin, j’avais de l’énergie à revendre! I was overflowing with energy – I had energy left to sell off. Unlike in previous concerts where I often felt nervous and unsure of myself, this time we were singing mainly songs we had sung many times before and I was happy and confident. Je m’en donnais à coeur joie­ – I was having a field day (literally I was giving myself of it with heart joy).

Sadly, toute bonne chose a une fin – all good things come to an end, and having now moved to Oundle, I’ve decided to say goodbye to my Tuesday night rehearsals in Raunds but without a doubt I shall be sitting in the audience at their next concert wishing them well and waiting for that little tingle down the back of my neck when the music starts.