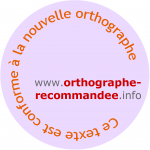 I mentioned in my last blog post that the French have reformed their spelling rules and that oignon is now spelled ognon. Here are some more onion expressions:

Interestingly, I have three French dictionaries in app format which I have bought in the last few years and none of them recognizes the new spelling, though it has long been a recommendation that dictionaries list both versions. My spellchecker on my new computer, on the other hand, does recognize both. These new rules were introduced as long ago as 1990 and were approved unanimously by L’Académie française but it was only in September 2015 that publishers finally decided that all school text books would make the changes. That’s when fury erupted on social media and the changes hit the headlines. Even British newspapers reported on the story. French university students who had struggled to learn the old complex spellings and had finally mastered them now felt some attachment to them and pride at having learned them. They accused the socialist government of dumbing down the language of Molière. There was much support for their campaign but the spelling reforms stand and personally I find they make perfect sense. Both old and new spellings are to be accepted in examinations but the new spellings are recommended, so I will do my best to explain some of the main changes and will try to use them from now on. I have left out some details. For a more detailed guide in French on the subject take a look at this website and download this pdf. There are ten areas of change. Here are the first five.

Now there is a distinction:

Bye bye: un événement (an event), un réglement (rules), je céderai (I will give in), ils régleraient (they would settle up / regulate)

Notice though that we still have un médecin and la médicine.

If you are interested in the origin of this expression, I suggest you buy my book where all is revealed!

in the noun jeûne (fast);

and in just those forms of the verb croître /croitre (to grow) where there could be some confusion with the verb croire (to believe) e.g. il croît (he grows), il croit (he believes).

What do you think of the changes? Can you think of any other examples of words which will now change to conform to these first five rules? Please leave a comment. I’ll be back with the other five areas of change next week.