Here is the second half of the spelling reforms in France which have caused such recent controversy despite it being old news. For the first five changes, please refer to last week’s blog and for more details in French look here. 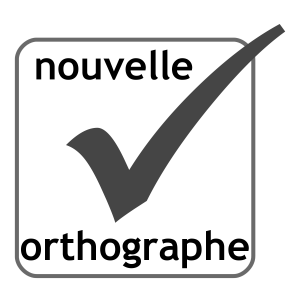 Notice that this doesn’t mean that the word is pronounced exactly as it would be in English; rather it has been modified to sound more natural to a French speaker and therefore to be more easily absorbed into the French language.

So ‘to go away for a weekend’ will now be partir en weekend.

In fact, dictionary writers are invited to extend the rules above to all hyphenated words so, for example, porte-monnaie (a purse) now becomes portemonnaie.

Also, verbs which formerly ended in -otter will now end in -oter with one T. Exceptions to this new spelling rule are the verbs botter (to boot) which comes from a noun –  la botte (the boot) – and any other verbs which come from nouns with a double consonant. So we now have the lovely verb mangeoter (to eat without appetite; to pick at one’s food) which is now in line with another verb I rather like, neigeoter (to snow a little).

There is also now a tréma in the word gageüre (challenge) –

There are several anomalies which have also been regularized. Here are a few of them:

asseoir → assoir (to sit somebody down)

I hope I’ve managed to summarize well enough for you to follow the main ideas and that you don’t find the whole thing too much of une véritable gageüre and that it hasn’t made you feel too combattif /combattive ! If it’s all too much for you, go for a trip to the supermarket to take your mind off it, and fill your charriot with ognons ! Don’t forget to leave a comment below, please.