Many thanks to the BBC Radio 4 programme You and Yours for helping my son get his money back from the driving instructor agency Drive Dynamics after a 4-month battle. If you live in the U.K., you can hear the article here starting at about 20 minutes into the programme. 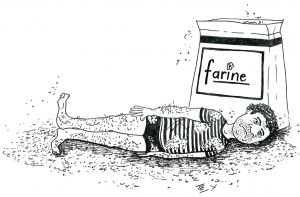 This has reminded me of a useful, colloquial French expression which features in my book, Je mourrai moins bête: 200 French expressions to help you die less stupid (available on Amazon or from The Oundle Bookshop).

Literally: to roll somebody in flour

Literally: to have oneself rolled in flour

They tried to dupe us but they didn’t succeed.

This 19th century expression is a happy combination of two ideas, each to do with being conned. Se faire rouler on its own means ‘to be done’: je me suis fait rouler ! – I’ve been done! La farine once had the meaning of ‘deceitful arguments’ and, also, might have referred to the makeup used by actors to disguise their faces when taking on a role. Put the two halves together and you have been well and truly duped!

By the way, if you have read my book and enjoyed it, please leave a review on Amazon!